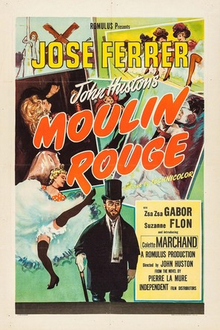 The “exclamation point” – ! – as an epithet adds umph to a given phrase. Writers from decades ago would use them sparingly to really prove a point and the mark itself would carry weight. Its raw power has since diminished somewhat: communication via text requires serious self-editing to ensure that tone and intent carry forward with meaning. Good, modern writing still holds an exclamation point’s residual restraint, too. The decision to not use an exclamation point carries meaning and tone with it, if the writer uses the mark sparingly. Too often a writer will riddle her work with points to scale back an unpleasant tone, or to push an enthusiasm, when there is obviously none. Haphazard exclamation points exude phoniness an a false take on whatever “honesty” means. Overuse destroys meaning in favor of creative safety, which is not always bad. Audiences love the clean pastiche of Moulin Rouge! The plot is simple and unoriginal and two hours outlines a full character palate and arcs. Director Baz Luhrmann executes the idea in a coup de grâce to John Huston’s 1952 take on Sidney Lanfield’s 1938 remix of Ewald André Dupont’s silent Moulin Rouge. Film has captured four iterations of Bohemia through six decades of human review, processing a rewrite each time as the Moulin Rouge itself fades further into distant memory. Cabaret is not a popular destination anymore that modern young people seek out, so Luhrmann took as many appropriations from modern culture and plopped them into the shell of a Moulin Rouge and topped it with a deft “!” as if shouting it from the balcony of the place itself a century later.  END_OF_DOCUMENT_TOKEN_TO_BE_REPLACED

In fact, if we use The Godfather (either) as our reference point for clarity, quality and non-absurdity, Prizzi’s Honor feels even the more surreal. Both films are set in fictitious micro-environments where organized family business often exists through crime motifs, or through (as Prizzi’s Honor illuminates it) honor and duty. We understand that crime, as a driver for story and for history, works insofar as purposeful or logical narration will allow. Only in specific context does random killing, for example, not derail an otherwise reasonable character framework; usually this character is molded and guided toward psychotic break, but sometimes a story will include a random killing as a moment of opacity. Purposeful confusion, though, is not a hallmark of absurdity, because the director will likely resolve the issue. The killing will turn out not to be random; the character is hiding disassociative personality traits; there exists a ‘whodunit’ mystery that unfolds. These film tropes, while tricky to clarify (see: The Usual Suspects), guide an audience, as the logic behind the story unfolds.  END_OF_DOCUMENT_TOKEN_TO_BE_REPLACED