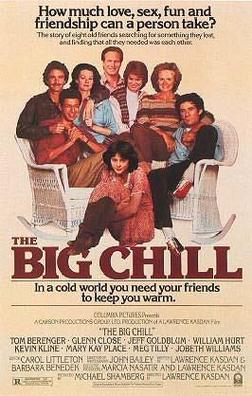 But I do have friends and even when I don’t see my friends for long periods of time, when we do meet, it’s as though nothing has changed. We’re older, collectively, and we no longer complain about the same things, but we have each other and we have our stories to find comfort in them. Since we’ve left each other’s daily company, we’ve had time to breathe, and while we don’t share the same experiences, we experience together. The dynamic seems to be cyclical in that we continue to learn from one another’s separate experiences. Though separated by 200 miles, we have phones, email, social media and any other way to replicate the experience of being together. It doesn’t take an event to get us together. The Big Chill replicates 70% of my experience. END_OF_DOCUMENT_TOKEN_TO_BE_REPLACED I was talking to mom yesterday that I’d watched this movie and her response, as usual, was, “Well. What did you think?” I’d responded to this question before in my usual ambivalence: “I’m not sure, yet. I need to think about it.” And then we gossiped about this or that. I’m not surprised that mom has seen this movie. I’m surprised if anyone else has.

Tender Mercies, one of 1983’s Best Picture nominees, is part of film canon that has ridden below the surface for its 30 year history. Whether its been overshadowed by Terms of Endearment or The Big Chill or….1983 was a particularly weak year, and Tender Mercies fit the bill of an overwhelmingly mediocre film with a limited budget making the most of its resources. Tender Mercies doesn’t seem validate either of those hypotheses on the surface. The film itself is a 90-minute exposé on Robert Duvall’s acting ability and a concise reflection on the complexity of simplicity. The man, Mac Sledge, is surfeit of problems, but within the realm of Waxahachie, TX, the microcosm is simple: if he runs away and quits drankin’ his life will become the beacon of peace he’s looking for. It’s a 90-minute riff on the country-western ethos, so familiar to some and so alien to others.

Perhaps its too country-western, as Duvall himself expressed during the theatrical promotion and initial trial run. Perhaps Duvall’s plans didn’t lend themselves to a terribly profitable venture: the aesthetic of country-western is often synonymous with poor or struggling – these simple folks just don’t go to the movies and spend dollars on the moving pictures when there’s mouths to feed. Perhaps the studio, enamored with Duvall in The Godfather & The Godfather II and Apocalypse Now, agreed to fund his pet project, a Horton Foote (To Kill A Mockingbird, The Chase) led-American values film. Somewhere in this particular production hell the studio lost interest and what we and the Academy were left with was a reflexive film project, displaying Middle American values, while adhering to them, without parodying them. It’s an interesting and rare combination – and was rewarded with a shelving and an Oscar nod for the film and a win for Duvall.

Ask anyone under 40 who Robert Duvall is. END_OF_DOCUMENT_TOKEN_TO_BE_REPLACED