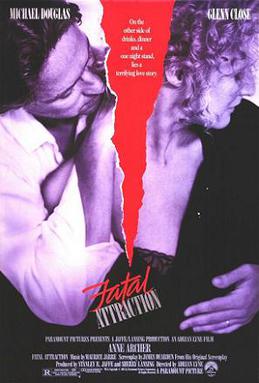 Alternatively, Fatal Attraction ended with Dan in jail. This ending, however, did not fuse climax and catharsis well enough, did not test well enough with audiences, and did not demonstrate a logic consistent with its smart world building. So the director rewrote, refilmed, and recut a version of Fatal Attraction that ended with everything in its right place: unwell Alex dead and philandering Dan without consequence. It didn’t even seem like he grew from his near miss. The blame, alternatively, has been cast onto Alex, poor, crazy Alex as the holder of bad fortune and loser of minds. Contemporary Dan is the embodiment of clueless, white, male privilege.

Well enough, Alex Forrest as a character has gotten a fair share of criticism and a few dozen thinkpieces denouncing her trope as anti-woman, anti-feminist, and wholly modernist. Unable to cope with — something — Alex descends from a career-minded single woman into total hysterical madness; over a weekend fling? When peeled back, alternatively, this characterization doesn’t hold up to immediate scrutiny. While thrilling, this type of surface-level character making, is as deep as she is manic. It means that Fatal Attraction is an expensive thrill with a character assassination at the expense of the white, male viewers whose “marriages were saved after watching this movie!” as if any of these hysterical men had any sort of gumption in the first place.

No, it means this: Fatal Attraction‘s writers trapped their perception of a woman scorned and broken bad into Alex, with every other character playing coy. That word, hysterical, is loaded with etymology related to the uterus and is taken to mean “at the whim of an emotional female,” or, anti-logical, because for millennia or more, female meant baby-bearing, illogical, subservient being. Alternatively, it means that watching Fatal Attraction thirty years later leaves a puzzling reconstruction of what it means to eschew a discussion of mental health. Alex originally kills herself, but in the theatrical cut, Dan’s wife Beth, somehow not hysterical, helps Alex kill herself.

Suicide is not, at any angle, pleasant or cathartic. It is, however, always unpleasant and claustrophobic. Homicide in self-defense is more palatable (and a more fitting ending to this confused film) and puts a lid on the self-contained media. Alternatively, why not demonstrate that Dan (Michael Douglas) and Beth (Anne Archer) are irrevocably changed, that Alex’s hyperexponential demise into madness was not isolated and linear, that people, no matter how far away they move from a mad environment (like New York City), don’t find peace in bucolia. Fatal Attraction could have explored the normal event of a weekend tryst casting its gloom, forever, over a person and his family. “Fatal” could have been a slow descent, whose forgiveness is evanescent. Lars von Trier takes this path; Adrian Lyne does not.

Fatal Attraction is still a good movie for other intents and purposes. It tells a contained, logical story, acted elegantly, and directed competently. Alex Forrest is still a commanding presence and Glenn Close should still be proud of how she played this character, whose instability makes a comprehensible leap from decision to consequence. Regardless of how she could have been written, she was written (and played) as a servant to the story. Ultimately, Fatal Attraction is remembered as Michael Douglas’ other film from the late 80s and the one where Glenn Close is crazy. This is reductive and not inaccurate. The alternate ending would not have changed this.

The Last Emperor won Best Picture in 1987. It was an exquisite and delicate portrait of Pu Yi, the dynastic leader who fell slowly as China transitioned away from the landed monarchs that ruled for millennia. The Last Emperor felt necessary and contemporary and rose above the comedy-drama in Moonstruck, Hope and Glory, and Broadcast News. Fatal Attraction felt out-of-place from this bunch, which is often a signal to a winning entry, but ultimately the zeitgeist was ready to remember delicate China, whose progressive transition was held in balance on a knife’s edge. It was not ready to be stuck with one.