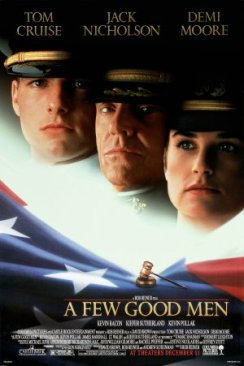 Is a man “good” if he is honorable, attentive, and dutiful? For a vague adjective – one that is routinely edited out of academic and non-creative writing for lack of rigor and specificity – good seems to evoke this sense of righteousness attributed to no single entity in particular. Its usage is biblical and universal. Its opposite is not necessarily bad, but rotten, pernicious, and the catch-all not-good. Many potential partners desire this trait in a mate. Mothers long for their sons and daughters to stay out of trouble, “up to no good,” they will call it.

What does it mean, then, to be a good man? If we call it an adjective of vaguery and looseness, then a good man is a man of any quality the beholder attributes to good. It could be honor, attention, and duty, but it could also be kindheartedness and honesty. Rob Reiner’s A Few Good Men does not ask us to define good, which is, well, good, because the line is thin between good and evil. Jack Nicholson’s Colonel Jessup toes the line as if there is no line. The audience, whose narrator is omnipotent, sees cover-up and deception, but Col. Jessup, the antagonist as written, sees duty and honor. Is fairness and justice for all more important than national security and unit cohesion, as Col. Jessup sees it? Is it good to value honor over life?

The audience follows Lt. Daniel Kaffee, a naval JAG with a head full of righteousness and neither the experience nor the will to operationalize it. Tom Cruise brings his own youthful exuberance to the role. Screenwriter Aaron Sorkin asks us to see him as a young man trying to make good – good decisions, good representation, good advocacy – to do the right thing. Right is another word often shut down by dutiful editors. It means nothing out of a highly complex context and is still misinterpreted by those with different moral constitutions. If no moral absolutism exists, then the difference between right and wrong is the same as the difference between right and good.

Sorkin’s screenplay does not ask the audience to make these decisions, though, and thoughtfully intertwines the levelheadedness of Lt. Commander JoAnne Galloway, an intensely passionate Naval JAG, whose pugnacious absolutism attempts to teeter the line between Jessup and Kaffee. Demi Moore’s character stands up for what is more right – better – by first demanding Kaffee fight for justice and then by urging plea when all hope seems lost. Is to salvage a lost cause good? Is letting Jessup win the right thing to do, to stem the bleeding and move onto the next good deed? Or should the team fight for what is right and good until no more fight is possible? Ultimately, Jessup and his cover-up are convicted of conspiracy and are punished off-screen for the death of one of his soldiers. This is a tidy conclusion and one that attempts to drive Sorkin’s point to its natural conclusion, that individual dignity and justice overrules unit cohesion and national security. It is not worth having a military to protect us if this same military believes that its goodness is more valuable than those it protects.

Unforgiven, Clint Eastwood’s capstone to the western genre, is a clear winner for 1992. While other nominees, Howards End, Scent of a Woman, and The Crying Game have left lasting impressions on film, they remain somewhat obscure in popular culture. Even Nicholson’s famous “You Can’t Handle Truth,” line does not overwhelm the complexity of 1992’s Best Picture winner.