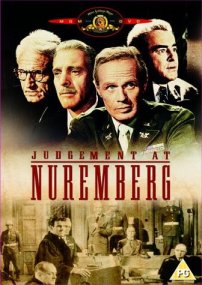 Abby Mann – an American – adapted his own dramatic screenplay of Judgement and Nuremberg for the screen, and at over three hours, it’s hard to imagine that all 186 minutes are necessary. But remember the scope of this narrative: we, as an audience, are asked to follow along with the Big Issues through the lens of ideologues in Tracy’s adjudicator and Schell’s defense attorney; we are asked to question the notion that Nazis were Nazis were Nazis. That is, within the scope of a mere three hours, we are asked to reevaluate our revisionist history of the Third Reich and come up with an impossible verdict. Three hours! All while the story is half-heartedly developing a benign relationship between Marlene Dietrich’s Frau Bertholt and Judge Hayward asking us to examine “correctness” in sterilizing the feeble-minded. Three hours is quite short to develop opinions on these matters.

But the courtroom medium does help to convey the messages in a direct manner. Most of the pertinent dialogue is delivered in a series of witness examinations and their subsequent cross-examinations. Our writer’s fulcrum of justice comes directly from Hayward’s mouth. The issues are presented, through witness testimony, as a series of vignettes concerning eugenics, Aryan vs. non-Aryan politics and relationships and perhaps, most poignantly, the use of visuals to demonstrate the monstrosities of both. Most courtroom drama plays out like this; this one is different because of the subject manner and its Questions.

Mann is certainly a deft screenwriter because the combination of the courtroom drama could drag as to get bogged down in its own self service. Instead, Kramer uses the script and its setting as a canvas to let the actors act. The film’s beauty is in its simplicity; there are few-to-no intermediate trysts, very few motivations except for those questions specifically asked but not answered – because morality is not so simple. Both director and writer ask us to expand our perspective, and I’m pleased to say this film is a treasure in that respect.